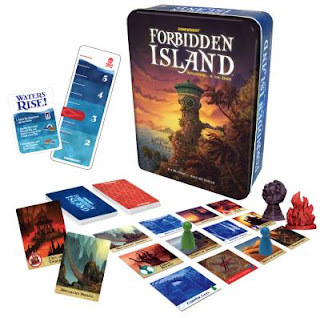 My daughter LOVES Gamewright games! She is constantly asking to play Order's Up, Duck Duck Bruce, Feed the Kitty, Go Away Monster, and many others. The quality of Gamewright games is always top notch and the themes of the games appeal to kids and adults alike. When I first heard that Gamewright was publishing a game by the Matt Leacock I was intrigued. I had played Pandemic and Roll Through the Ages (two of Matt's other games) and really like both of them. I was looking forward to what he could bring to the Gamewright lineup with Forbidden Island.

This post isn't going to contain a lengthy rules explanation. For those interested the rules are posted online on the Gamewright website. Instead I'm going to go over a few of the reasons why I enjoy Forbidden Island and why I think you should check it out.

Cooperative games rule! I'm a big fan of cooperative games. The first co-op that I played was Shadow's over Camelot. Shadow's is still one of my favorites to this day. Forbidden Island is also a cooperative game. A cooperative game, for those who don't know, is a game where all players are on the same team trying to beat the game. It's either everyone wins, or everyone looses. In a good co-op there is almost always a lot of tension that builds up during the game. In Forbidden Island you are trying to collect treasures on an Island and fly off of that Island before it sinks underneath you. As the game goes on more and more of the Island disappears and the tension builds. You usually don't know if you're going to win until the very end.
Variable Player Abilities: In Forbidden Island everyone has a special ability. You can be an Explorer, Pilot, Navigator, Diver, or an Engineer. Your character lets you do something that "breaks" the normal rules. The Diver for example will let you swim to another tile where this is not allowed for all of the other players. It's fun to see how everyones special abilities work with each other in figuring out how to beat the game.
Difficulty Levels: Forbidden Island allows you to vary the difficulty level of the game. The game comes with a Water Meter. As soon as the Water Meter gets to the skull and crossbones everyone dies and you loose the game. This is one of the four ways that you can loose. You can start the game at different levels on the Water Meter. Beginners should probably start at Novice, but the daring can jump all of the way up to legendary. The ability to vary the difficulty allows families to play with younger kids and also makes it a little easier to introduce the game to new players. It also helps add longevity to the game by making it more challenging as you get better at playing.
Modular Board: Modular board games allow you to play on a new board each game because the board is built fresh every time you play. Forbidden Island comes with 24 tiles and they are randomly placed in order to create your board. You never quite know what you are going to get. This affects the kind of strategy that you are going to play and dramatically adds to the re playability of the game. Every time you play it's fun to see how your Island gets set up and this always leads to discussion on how to best attack the game.
Forbidden Island is a lot of fun. It would be a welcome additional to anyones game collection. It has been nominated for the game of the year in Germany this year, The Spiel Des Jahres. I think it's definitely worthy of the nomination and gets my vote to win. Thanks for reading and happy gaming!
Anyone interested in purchasing Forbidden Island can find out more about it here.
Posted by Kevin at 2:02 PM 2 comments: