The majority of my gaming at the moment is with my wife, so I'm always looking for great two player games. Three of my favorites are Dominion, Pandemic, and Can't Stop. The great thing about these games is that they are great with two, but can play up to four and in some cases more with expansions. 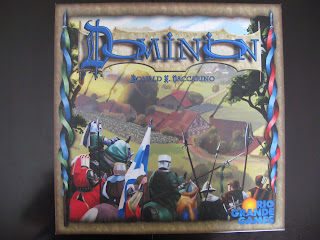 Many of you know that Dominion is my favorite game. I was so excited when I got my first shipment of games mainly because the new Dominion expansion was part of it. My wife and I have played over 50 games of Dominion and I'm still not sick of it. The majority of the games have been with just us two, but we have also played many times with friends and have had one or two 6 player games with the Intrigue expansion. So why is it such a good two player game? The game is all about building the best deck of cards. You start out with 10 cards in your deck and throughout the game you add to the deck by buying new cards. With two players there is very little down time between turns so the game goes very quick. Most games are over in around 20 minutes. Another reason it scales to two so well is that the strategy for two is the same as the strategy with more players. It all about building your deck, and of course keeping your eye on what everyone else is buying to. If you don't have Dominion, you should definitely get it. 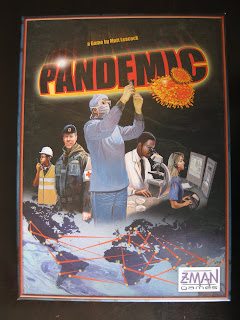 Pandemic is one of those rare multi player games that I would actually prefer to play with two as opposed to the full compliment of players. My shipment on Monday also included the new expansion Pandemic: On the Brink and I'm looking forward to breaking that one out as well. Pandemic is a cooperative game where all the players are working to cure four diseases before they take over the world. It's a very timely theme considering the H1N1. :) So why is this one such a good two player game? This game is very difficult to win on the hardest difficulty level. My wife and I have 20+ games played and we've only won the hardest level a few times. It is a little easier with two players, so that's one of the reasons I like playing with two. What can I say, I like to win. The difficulty of the game is also what makes it great. A good cooperative game is hard to win, but not too hard to where you get discouraged. This game has the perfect balance. This is another game where you can't just play once. When the game kicks your butt, you have to play again to show the game who's boss. :) 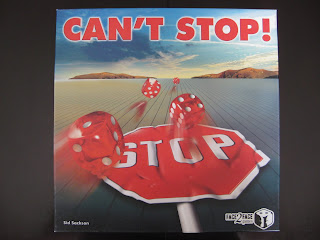 Can't stop is a great filler. Filler games are those games you pull out when you want a quick light game before you wind up a game night, or if you're waiting for other players to come, or you want something quick to play between larger games. There's no setup to the game and it is very easy to explain. People who have never played can get a quick run down of the rules and be playing in minutes. This game really comes down to the luck of the dice, but there's some interesting strategy on when to stop rolling, and what numbers you should take. So why is this one a good two player game? For exactly the same reasons it's a good 3 or 4 player game. You really don't lose anything by playing with fewer players. It's quick, has some light strategy, and is a very lighthearted game where everyone always has a great time. Some of my best gaming moments have come with this game. My brother in law had an amazing string of luck and came from waaaaaaaay behind to win my wife and I. You're never completely out of this game and you never know whose going to win until the end.

So if you're looking for a great two player game, you can't go wrong with any of these. Thanks for reading and happy gaming!
Posted by Kevin at 10:06 AM 1 comment:

The first shipment is here!

My first shipment of games is finally here! I arrived home from work to see 4 boxes of games waiting to be opened. It was like Christmas in October. :) Here's a list of the games that I currently have in stock. I am offering a 20% discount off of retail. The first price is full retail and the bold price is with my discount: 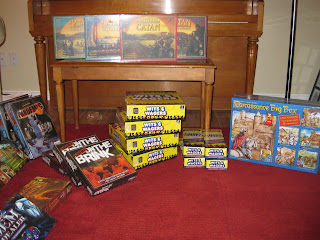 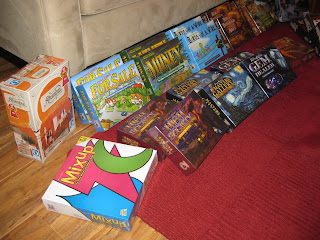 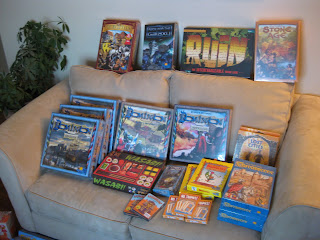 If you're interested in a game and want to know more about it, let me know and I can help you find out of it's the game for you. I also have open copies of most of the games I have in stock. If you want to try a game before you buy it, you can host a game night and I'll come teach you any game you might be interested it. Thanks for reading and happy gaming from The Board Game Nut!
Posted by Kevin at 6:24 PM 4 comments:

Card games are becoming a favorite of mine. They are usually very quick to play and many of them offer some fun strategy. One of my favorite card games is No Thanks! 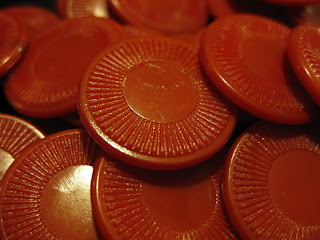 No Thanks! consists of 33 cards numbered 3 ot 35 and 55 playing chips. To start the game each player takes 11 chips. 9 cards are then randomly taken from the deck and removed from the game. It's important that nobody knows which cards are removed. The remaining cards in the deck are put in the middle of the table and the first card is turned over. A starting player is chosen. The starting player then has a decision to make: Do I take the card, or do I pass on the card by puting one of my chips on it. If you take the card you now have the points equal to the value of the card at the end of the game, plus all the chips that have been put on the card. If you pass, the turn goes clockwise and the next person has the same decision to make: Do I take the card, or do I pass by puting a chip on it. When someone takes a card another one from the deck is turned over and play goes on until until all cards have found someone willing to accept them. 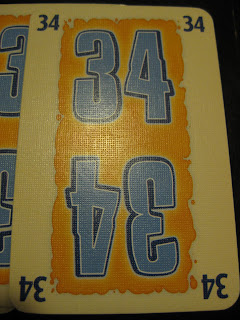 There are a few additional rules that add some interesting and really fun strategic decisions. The first is: If you run out of chips and don't want the card, you are forced to take it. Many times I've gotten stuck with a high card because I don't have any chips left. So if a 35 comes up that nobody wants, everyone will most likely pass until someone runs out of chips. It's fun to see who gets stuck with a crappy card. As long as it's not you though. :) Another rule is that chips are worth -1 points at the end of the game. This theoretically means that you could end up with negative points. I've only seen this once in over 40 plays. My wife had an amazing string of luck and got -13. She won that game pretty easily. The final rule is that if you have a run of cards, the point value of those cards for the end of the game is equal to the lowest card in the run. For example: If you have a run of the 10, 11, 12, and 13, all of those cards are only worth 10, the lowest card in the run. This makes for some fun decisions. If you have the 22 for example, and the 20 comes up, you can take the 20 but you run the risk of not getting the 21 to complete the run. You would then be stuck with 42 points at the end of the game for those two cards. If the 21 comes up later in the game you can link the run together and those three cards are only worth 20. The thing is, the 21 might never come up because it could be one of the nine cards randomly taken out of the game, or someone could see that you really need that card and take it before you can. At the end of the game you count up the value of all of your cards and subtract any chips that you still have. The winner is the one who has the least amount of points.

I really like this game. It's got fun strategic decision making, a short playing time, and it's very portable. I took it backpacking earlier this year and we played it over 30 times. If you haven't played I would highly recommend you checking it out.
Posted by Kevin at 7:23 PM No comments:

Well...it's taken a little longer than I thought, but I am officially the owner of The Board Game Nut. For those of you who don't know, I will be selling board games and card games, as well as any other game accessories anyone might want. I'm excited to get going and start making some orders! I sent in my application to a game distributor today and am hoping (keeping my fingers crossed) that I hear back from them soon and can make my first order within the week. I'm planning on keeping my inventory updated on the blog...at least for now. I've reserved www.theboardgamenut.com for when I'm ready to get my website built, but that's a few months down the road. Once I get some games I'll post once a week (probably Sat or Sun) with the games I currently have available. Initially my inventory will be pretty small, but I'm planning on monthly orders to gradually build up my selection. Please let me know if you're interested in a specific game and I can make sure to get it on my first order, or any orders after that. If you want any recommendations I've got a ton of great games to recommend for anyone, whether you're a party gamer, a serious stategy gamer, or anyone in between. Here's a list of the games I'm thinking about ordering:

This isn't a final list by any means. If you see a game on the list that you want let me know, or if there is a game that's not on the list let me know and I'll put it on the order. Contact me if you're interested an I'll get you the pricing info. I also have some games for rent. Details on that will be coming soon.
Posted by Kevin at 6:45 PM No comments: