In January of 2009 I ran into a site called boardgamegeek. Since then many hours have been spent on the site researching games and reading anything and everything board game related. Shortly after finding the site I found that you could log all of the games that you have played. You can go into as much detail logging games as you like, including: where you played, number of players, who played, who won, what the scores were, comments on the game, and even if you want to post it to twitter. I usually just log the game, date, and where I played the game at. It's been kind of fun going back a seeing what I've been playing for the past two years. I thought I would post some useless stats on my game playing for the past two years in case anyone was interested. Who knows, it might inspire someone else to log their game plays as well. :)

Different games played: Over the past two years I've played 143 different games. One of my favorite things is getting a new game, reading through the rules a few times, and jumping into a new board game experience. My board game collection has grown dramatically in the past few years and I don't see it slowing down much.

Most played game: For those who know me this won't come as a surprise. My most played board game the past two years is Dominion. I have played Dominion and it's many expansions 148 times. Despite all of my Dominion playing it hasn't gotten old. I'm always up for a game. My second most played game is No Thanks! with 51 plays. That's mostly due to over 30 plays on a backpacking trip. I was a little sick of that one after three days in the desert.

Total games played: I have done more gaming by far than the average person. I guess that's what happens with a hobby. Over the past two years I've played 743 total games. This doesn't include many kids games played with my daughter and nieces and nephews. Whew...that's a lot of games! That averages out to be about 31 games played a month.

When I look back and reflect on how much has happened in the past two years it's really pretty amazing. I've played a lot games, got to know A LOT of great people, strengthened friendships with those that I already knew, and started a board game business that will hopefully one day turn into something that will let me provide for my family doing something that I love. Board games have been a big part of my life I wouldn't want it any other way. Thanks for reading and happy gaming.
Posted by Kevin at 8:29 PM 3 comments:

Labels: Board Game Geek, Dominion, Logging Games, No Thanks 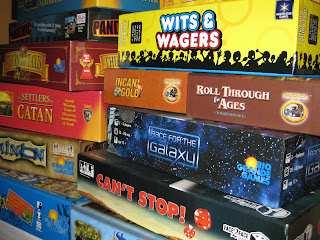 So why do people play games? This is a question that I've asked myself many times. As I put more and more time and effort into the hobby I see even more value in it. The game industry is growing. Games like Settlers of Catan and Ticket to Ride are becoming more mainstream. Barnes and Nobles even has games like Dominion and Forbidden Island. More people are being introduced to the wonderful world of modern board games. I've put together a list of some of the reasons that I like games. Feel free to comment and add some reasons of your own!

So whether you break out an old favorite, or play the latest and greatest game around, enjoy the value that comes from a good game! Happy gaming!
Posted by Kevin at 12:42 PM 4 comments: