If there are any you are interested in let me know and I can get you more info. For the ones I haven't played I'm most excited about Galaxy Trucker, but they all look like great games. I should have most of them for the game sale on the 4th and 5th of December, but if you want the game for sure contact me as soon as you can. Thanks for reading and happy gaming!
Posted by Kevin at 7:57 PM No comments: 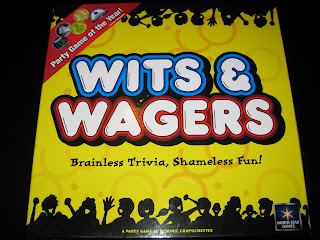 I'm not a big fan of party games. I know, I'm probably in the minority on this, but if I have the choice of a party game or a good strategy game, I'll choose the strategy game 10 times out of 10. And then I played Wits & Wagers...

Wits & Wagers is the first party game that I actually like and would request to play. It's the party game for those who don't like party games.

To play Wits & Wagers you choose one of 7 small white boards, a dry erase marker, and two betting chips that are the same color as your white board. 7 trivia cards are then taken from the box and someone is designated as the "question reader". The game comes with a bunch of betting chips and before the game a banker is chosen. After writing you're team name on your white board you are ready to play.

The "question reader" then reads the first question and the timer is turned over. Everyone writes their answer on their white board and when the time is up everyone reveals their answer. All the questions in the game have answers that are numerical. The anwers are ordered from smallest to largest on the mat below: 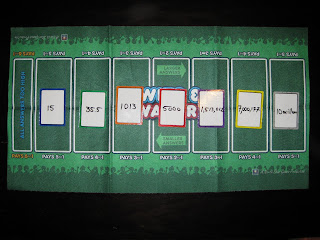 Depending on the answer is what odds the answer has. Odds range from 5:1 to 2:1 with the lowest and the highest answers having the highest odds. The timer is turned over again and everyone takes their two betting tokens and places them on the answer that they think is closest to the correct answer without going over. Tokens can be placed on one answer or split up between two. If you have won tokens in previous rounds they can be played as well. When the time expires the correct answer is revealed and those who bet on the correct answer win! The banker pays out depending on the odds and how many chips were put on the answer. The person who guessed the right answer gets three additional chips. This continues for 7 rounds and the person with the most chips after the 7th round is the winner! 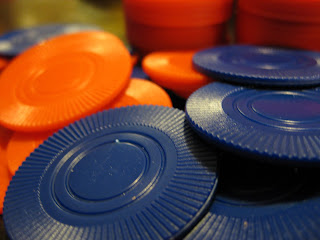 I haven't played a game of Wits & Wagers that hasn't been a blast. The only downfall I can see with the game is that we always seem to run out of chips, but this can easily be fixed. I highly recommend checking out Wits and Wagers, and if you can you should definately pick up a copy. Thanks for reading and happy gaming!
Posted by Kevin at 7:17 PM 1 comment: 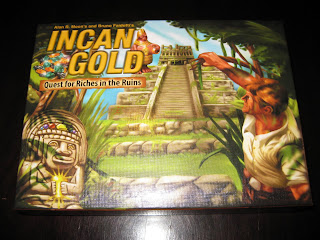 The following is the flavor text from the game instructions and gives you a good taste of the theme of the game:

"You and your fellow adventurers explore the ruins of an ancient Incan temple, looking for turquoise, obsidian and gold. At every turn, you must decide whether to play it safe by returning to camp with the treasure you've gathered so far, or to be a truly intrepid adventurer and keep on exploring. Going farther into the ruins means risking your treasure should you fall victim to the many hazards...giant spiders, wandering mummies, fire spouts and venomous snakes. But priceless Incan artifacts are rumored to exist here...and you can be the one to discover them if you conquer your fears and forge ahead.

What is your threshold for danger? How much treasure is enough for you? Find out by exploring Incan Gold!" 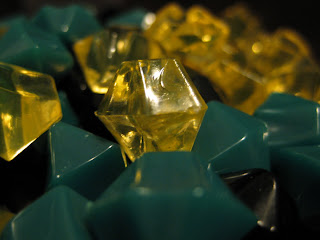 Incan gold is a press your luck type of game. If you are a more daring player you have the chance to get more treasure, but you also have the chance to lose a lot of treasure as well. Incan Gold consist 30 quest cards, 15 treasure cards numbering anywhere from 1 to 17, and 15 hazard cards (3 each of 5 hazards). There are also 5 artifact cards, a whole bunch of treasure gems, torch and camp cards, tent cards, and 5 temple cards to make your game board.

To start the game you lay out the 5 temple cards and put an artifact under each one of them. This acts as your "game board". For the first round you flip over one of the temple cards and shuffle the artifact into the deck of treasure and hazard cards (an additional treasure card is shuffled into the deck for each of the five rounds). The first card is then turned over. If it is treasure card the amount on the treasure card is split between all players that are on the expedition. If the treasure can't be split evenly the remaining treasure is left on the card. If the card is a hazard card no treasure is found and the explorers are warned of impending danger. All players then decide whether or not they want to continue on and search for treasure, or return back to camp with any treasure that they have found. To do this all players secretly chose either the torch card or the camp card. The torch card means you're continuing, and the camp card means you're going back to camp with your treasure. For those that decide to stay, the next card is turned over and if it is a treasure card the treasure is again split between the players or a hazard card is revealed. If two of the same hazard cards are turned over all players that are still on the expedition are lost (for this round only) and the treasure that they found is lost with them. If you decide to leave early you get to keep all treasure found and take any treasure that has been left on the cards. If more than one person is leaving the extra treasure is split between the players. If you are the only one that is leaving and there are artifacts that have been turned over you get to take the artifacts. If there are others that are leaving as well the artifacts stay. Artifacts are worth points at the end of the game. The round is over when all of the players are lost or have left. The cards are then reshuffled and another round begins. This continues for 5 rounds and at the end of the 5 rounds the person with the most treasure wins!

I really like Incan Gold. I'm a fan of the press your luck type of games. It's fun to see the risk/reward of the decisions you make. It's also fun to see the personalities of the people playing. I have some friends that my wife and I play games with. One of them is very risk adverse, and his wife...well, she better not go to Vegas. She's a risk taker! At least in games that is. (that's right, I'm talking about you Chris and Nancy :)) It will be fun to play this one with them. Another good thing about this game is that it plays up to 8. There aren't a whole lot of good strategy games that you can play with a bigger group. The only potential downfall to this game is that you do have to have at least three to play, so this game might not be the best choice if you normally only play with two.

So if you're looking for a light strategy press your luck type game this one might be for you. Thanks for reading and happy gaming!
Posted by Kevin at 11:07 PM 2 comments: