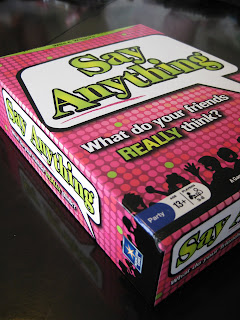 Say Anything is the latest party game from Northstar Games, the makers of Wits and Wagers. If you've read my Wits and Wagers post you know that I'm a big fan of the game. It's the first party game I've actually enjoyed. So is this the 2nd party game that I like? Read and find out. :)

The first time I played this game I was not impressed. The scoring seemed kind of wierd. The group didn't seem like they were having much fun. It just wasn't the greatest experience. It was still fun, but it wasn't something that I was looking forward to playing again soon. The second time I played I realized that I wasn't playing right the first time. Well that explains why it might not have been the best experience. I played it again and had a blast. I'm looking forward to getting this game to the table again.

The instructions start out with the following: "Say Anything is a light-hearted game about what you and your friends think. It gives you the chance to settle questions that have been hotly debated for centuries. For instance, "Who is the most overrated band of all time?" or "Which celebrity would be the most fun to hang out with for a day?" So dig deep into your heart or just come up with something witty - this is your chance to Say Anything!" 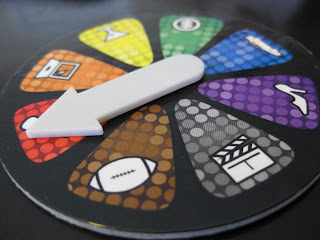 The game is similar to Wits and Wagers, but there are some important differences that make this game different enough that it's a completely unique experience. The game is played in 7 to 12 rounds depending on the number of players. It can play anywhere from 3 to 8 players, or more if you would like to play in teams. A person is randomly chosen to start and that player takes a card. All of the cards have "In My Opinion" in big green letters on the top and then 5 different phrases to chose from. An example of a phrase is "What's the best place to buy shoes?" (the perfect question for my wife), or "What's the weirdest thing that could happen right now?". The person whose turn it is choses a question, reads it aloud, and all other players wright down an answer to the question on their white boards. The player asking the question then takes the SELECT-O-MATIC 5000 and secretely choses the answer that he or she likes best and places the SELECT-O-MATIC 5000 face down on the table. 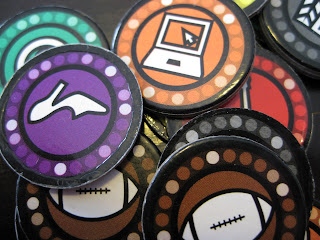 Everyone then has two player tokens that they use to guess which answer was picked. Players may place their tokens on the same answer or on different answers. Once everyone has placed their tokens the SELECT-O-MATIC 5000 is turned face up and everyone gets points if they chose the correct answer. The person whose answer was chosen gets a point, and everyone else who chose that answer gets a point as well. The person asking the question also gets one point for everyone who chose the answer he or she chose up to 3 points. Points are written down on the score card and the next round begins. The winner is the person with the most points at the end of the game.

Say anything is a lot of fun. It's fun see some of the crazy answers people come up with. I think the game is best when it's played with people you know. So it might not be the best get to know you game, but it's still would be a good choice in almost any situation. Thanks for reading and happy gaming!
Posted by Kevin at 1:50 PM